I cannot even trust myself with my judgment about Grilled Yam Soup.  My first reaction was that this would be great!  A second later, my second reaction was to question it.  “Ooooh, that looks good” VS. where does that come from: the calorie-less brothiness or my actual soul?

Am I missing a part of my heart?  Or have I fractured/fragmented/frazzled/fractioned/frayed so much that because this reaction felt like it came from my head (my thoughts, my perception), it is somehow less?  Do I need to expect something more visceral?  Is the ME version of ME more visceral or does the ME version of ME that if it comes from my head, then it comes from me!?!

I think about it thirdly, as I like the idea of Grilled Yam Soup.  I like the idea of coming home to it, taking it to school, putting it in boxes and being able to focus on enjoying every morsel.  But I cannot trust the why – I question the why.  I am so disjointed/disassociated/disgusted/dismayed that I cannot hear the voice fairly.  Or is it that I am so tired (no synonyms for that one; maybe just FUCKING tired), that I cannot hear it, that my soul and desired do not have the loudness that they should?  To bring it back to this recovery stage, stress is bogging down my soul?

Extrapolating from there: let’s say it is about the brothiness.  Maybe I just prefer quantity.  Maybe (in terms of my wife’s recovery), I am a finisher.  I can avoid the mistake by finding comfort in this.  The first stage though, is about dealing with the stress that’s bogging down my soul…

I thought that the concept of the Uncarved Block…

“According to Lao-tse [author of the oldest existing book of Tao-ism], the more man interfered with the natural balance produced and governed by the universal laws, the further away the harmony retreated into the distance.  The more forcing, the more trouble. … Everything had its own nature already within it, which could not be violated without causing difficulties.  When abstract and arbitrary rules were imposed from the outside, struggle was inevitable.  Only then did life become sour” (Hoff, 4).

“The essence of the principle of the Uncarved Block is that things [and people] in their original simplicity contain their own natural power, power that is easily spoiled and lost when that simplicity is changed … ‘things in their natural state’” (10-11).

“When you discard arrogance, complexity, and a few other things that get in the way, sooner or later you will discover that simple, childlike, and mysterious secret known to those of the Uncarved Block: Life is Fun” (20).

“When we learn to work with our own Inner Nature, and with the natural laws operating around us … then we work with the natural order of things and operate on the principle of minimal effort.  Since the natural world follows that principle, it does not make mistakes.  Mistakes are made – or imagined – by man, the creature with the overloaded Brain who separates himself from the supporting network of natural laws by interfering and trying too hard” (69-70).

…spoke to disruptions in sex, in emotion, in fatigue signals being the result of my disruptions in hunger.  By automating hunger, I disautomated the things of which the universe takes care.  I created difficulties and struggle and sourness and spoilage and overload and separation by messing with hunger.

It does not appear that that’s the case.  Based on our learnings, the disruptions in my hunger appear the same as the disruptions in sex, emotion, fatigue, gentleness.  The disruptions in all these appear to be because of difficulties and struggle and sourness and spoilage and overload and separation brought on by me messing with the “a lot / too much” principle.  They’ve been caused by me walking a very fine line between taking on a lot and taking on too much, probably on the latter side much more often than I’d like to admit.

My Uncarved Block is buried in black gook.  Our road of recovery, the path to reclaiming healthy, is about washing and scraping and chipping away that blackness surrounding my ME.

Imagine that there is a battle – a battle that wages between the blackness that grabs hold when stress is over-stress, a battle that is fought with the tools of recovery.

So, standing at the precipice of the next battleground, the next stage in reclaiming healthy, here are our lines, our path towards vivid, the next steps in recovery:

There are still gaps, especially in needing to develop more coping strategies and boundaries that prevent the blackness from taking hold of the symptoms of over-stress.  In fact, my wife brought up a point yesterday, that I completely understand.  I understand that this does not deal with the core issue as much as it could.  These lines fight the symptoms more than the disease.  Therefore, while this next stage in recovery means boundaries, stop-gaps and lines that help support the anti-stress movement, it still requires further thought about what to do about this whole stress thing (if I were to put money on it, I’d say there are more beautiful candle and happy list ideas in my future, once my wife digests our talk and taps into her beautiful, amazing and loving vivid genius).

Step by step, breath by breath, one day at a time.

Rivers know this, there is no hurry.  We shall get there some day.

I’ve had a song stuck in my head all week. No, not that unusual for me. But it was Sheryl Crow (at least it’s not Rolling Stones’ Sympathy for the Devil while working with missionaries in Kenya):

Not sure if this quite sums up where we are, where I am on this road of recovery. Mostly due to the irony of the song, it doesn’t really fit (ever so snuggly, he remembered). It doesn’t fit reclaiming healthy, finding the me-est version of me.

What’s better is this:

Never been a huge Sloan fan, but they have a resoundingly appropriate chorus: “If it feels good, do it. Even if you shouldn’t. Don’t let people mess you around.”

I should be able to rest if I just listen to my body, says majority opinion.

I haven’t been able to. It is not me, at least for now. I don’t feel hungry if I’m not constantly paying attention to it, checking the levels by a watch. I don’t like having to worry, about food in this case. I shouldn’t,  but these feel good, appropriate for me, right. They fit ever so snuggly.

So fuck you blackness and your shoulds, since that’s the source of them, I know.  We’ll do what works for us, the lines that work for us and make us vivid – a vividness that will fight to outshine even the blackest of your dark corners.

After digesting Thursday’s Naturopath appointment (a part of the support system and a resource, but not a driver of recovery – that’s US!), my own thoughts over the last week, what Guidance friend said to me yesterday about heart and soul and last but fucking definitely not least, what my wife wrote to me on the fridge, here’s what I’m thinking the true culprit is… 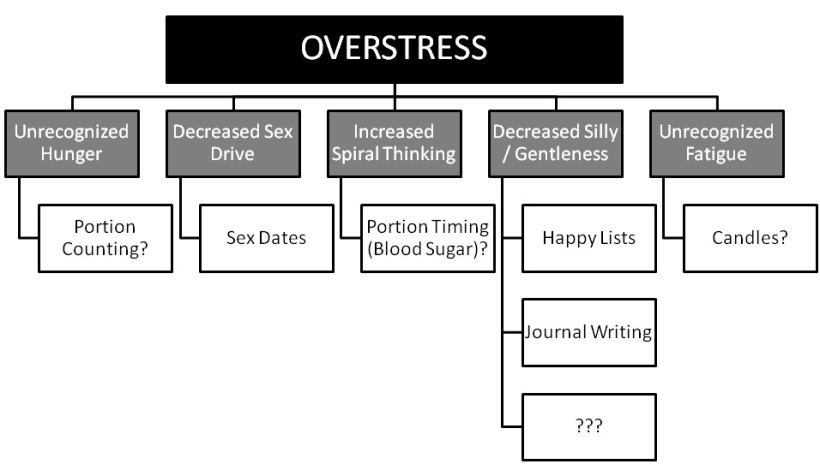 This is not yet the next step.  This is seeing where to take the next step, the next puddle in which we will jump, with giant smiles on our faces, holding hands, hands that fit ever-so-snuggly.

I haven’t thought about this much, but I’m sure the thought has crossed my mind once or twice.  I run a breakfast program at my school, serving 150-200 students a day, so my philosophy runs counter to what a lot of teachers practice about eating in class.  My current batch of grade tens haven’t gotten used to eating throughout the day so that they aren’t hungry after 225 minutes of class straight, very often with a gym class in there somewhere.

I had my first Master’s class last night.  I ate before and came home hungry.  More than hungry though, I was tired.  I ate what I thought would be enough and given the quantity, I thought it would be.

I woke up an hour and a half ago.  I have not made it back to sleep.  I think I am hungry.  I have promised myself that I want to rest now, so I will not be getting up to grab something (even a drink of some sort).  I am exhausted, but I cannot even sleep because I am hungry.  Not famished, but it proves that in not eating enough throughout the day yesterday – being too busy to listen to my nature and act as my Uncarved Block – I could not make it through the night without being woken up and kept up by HUNGER.

Choosing Raw and Greatist do a “Links of the Week,” so I figured, what the hell… let’s co-opt the idea!

1. The ever-intelligent and inspirational Neghar Fonooni turned me on to this little ditty: “Byron Katie, author of Loving What Is says about [self-deprecating] thoughts: ‘A thought is harmless unless we believe it.  It’s not our thoughts, but our attachment to our thoughts, that causes suffering.  Attaching to a thought means believing that it’s true, without inquiring.  A belief is a thought that we’ve been attaching to, often for years.’ … Tell yourself something enough times and it will become true for you, no matter how far off it is from reality.”

The way that my wife feels about herself sometimes, her self-worth, her self-image, her direction, these are far off from reality.  These are far off from reality because the blackness took hold of them and made her believe they were true, without inquiring.  For me, the lack of stomach definition is a trigger, and may actually be a figment of my imagination.  However, if I continue to believe that it defines me, that it is anywhere near as important as valuing myself or being a capable Don, then I have given it to the blackness, given these thoughts to it to be malevolently twisted into flaws.  Instead, treating ourselves compassionately, telling ourselves that “our weaknesses are not the blackness’ anymore,” telling ourselves that “I value myself,” these will allow us to reclaim healthy thoughts from the blackest pits of neglect.

How many arguments between my wife and I, my parents, their parents, their (you get my drift), has been caused simply by hunger?  I do not want to not understand my hunger.  I do not want to be able to blame not recognizing my hunger at a 6 as the reason for a fight.  It is why I ate lunch yesterday, because I need to know.  Not that I need to be in control or that I shouldn’t let myself get hungry, but because I want to be a strong, loving and respectful person – none of which can happen with overwhelming hunger, not the least of which because it gives the blackness traction and a willing ear to hear its screams.